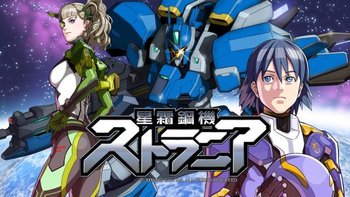 Strania -The Stella Machina- is a Vertical Scrolling Shooter by G.rev, the same developers behind Border Down and Senko no Ronde, as well as the providers of the engine used in Treasure's Ikaruga. Strania is an old-school throwback to classic arcade shooters of the 1980s.

The arcade game was first released in 2009, players take the role of the Stranian force's Soichirou Touma (player 1) and Yu Beatrix Barrett (player 2) as they pilot their mecha and take on the Vower. Just as the old shoot 'em up days, players plows through everything that stands in their way, collecting various weapon power-ups, and generally blowing stuff up.

It was later released for the Xbox 360 via Xbox LIVE Arcade on March 30, 2011. Roughly two months after its release, G.rev released the downloadable Side: Vower Expansion Pack for the game. As the title suggests, the Side: Vower expansion allows the players to play as the enemy forces, the Vower's Yosemite (player 1) and Su Quadra (player 2), while the game's original stages are played in reverse, adding in a new soundtrack, and throwing in a harder game. A PC version has since been released in Fall of 2015 through Steam.

Amidst Strania's and Vower's conflict, the following tropes are provided: