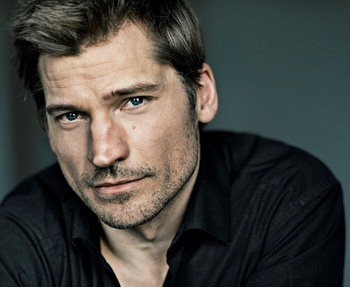 "Ever since I was a kid, I always wanted to be an actor."
Advertisement:

Nikolaj Coster-Waldau (born 27 July 1970 in Rudkøbing, Denmark) is a handsome actor from Denmark who has been active in the industry since 1994 and has gained a reputation for Fake Nationality. After graduating from the National Theater School in 1993, he starred in a production of Hamlet, and his first film role was in the 1994 thriller Nattevagten (Nightwatch). His first Hollywood role was in Ridley Scott's 2001 Black Hawk Down as Delta Force sergeant Gary Gordon, who died in the Battle of Mogadishu and later was awarded a Medal of Honor.

Nikolaj later appeared in Kingdom of Heaven, again a Ridley Scott film, as the village sheriff. He followed that up with a minor role in Firewall. His first starring role in English-language media was as detective John Amsterdam in New Amsterdam (2008). His most prominent role so far, though, is as the handsome but arrogant knight Ser Jaime Lannister, called "Kingslayer," in HBO's Game of Thrones, based on A Song of Ice and Fire by George R. R. Martin. He is also in the 2013's horror movie Mama with Jessica Chastain and sci-fi action thriller Oblivion with Tom Cruise and Morgan Freeman.

In his private life, Nikolaj Coster-Waldau is married to Greenlandic actress-model Nukaaka, with whom he has two daughters.