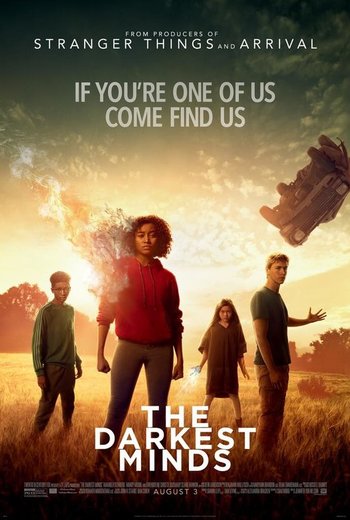 "We don’t have to stay in darkness. We’ve survived all of this. I will fight for all of us."
"Soon there wouldn’t be any kids anywhere. The government wasn’t afraid of what happened to the ones that didn’t make it. They were afraid of us, because the ones that survived changed."
— Ruby
Advertisement:

The Darkest Minds is a 2018 American Science Fiction film based on Alexandra Bracken's novel of the same name. It is directed by Jennifer Yuh Nelson (director of Kung Fu Panda 2 and Kung Fu Panda 3) in her live-action directorial debut, and stars Amandla Stenberg, Mandy Moore, Gwendoline Christie and Harris Dickinson.

After a disease wipes out almost all of America's children, the survivors gain mysterious abilities and are placed in internment camps due to the government deeming them to be a threat.

Ruby is a 16-year-old girl who survived the disease when she was 10, who by happenstance finds a group of teens who are in hiding from the government as well. They then work to reclaim their future and find others trying to survive in the process.

The Darkest Minds has examples of: