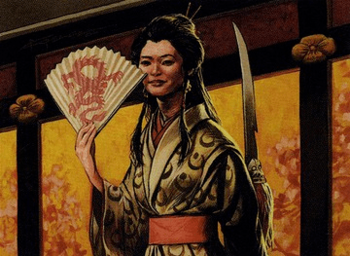 So demure. So elegant. So dangerous.
"Just because somepony is ladylike doesn't make her weak. In fact, by using her wits, a seemingly defenseless pony can be the one who outsmarts and outshines them all."
— Twilight Sparkle (about Rarity), My Little Pony: Friendship Is Magic, "A Dog and Pony Show"
Advertisement:

Step lightly around delicate flowers like the English Rose or the Yamato Nadeshiko. Their manner and appearance suggest meekness and submission and they have perfect etiquette, never speaking out of turn, their voices but an ephemeral whisper. They are beautiful things, kind and pure, clothed in fine dresses and soft gloves who hold silk fans... made of sharpened blades. In short, beware the proper ones.

Such a lady may look like The Ingenue, perhaps even purposefully, but this rose has thorns. Others may think these characters are powerless, but they know how to be subtle and operate within the means their "role" grants them. She may not ever show it publicly, but this character has a cunning mind with sharp intelligence and a strong will that won't bow for anyone. A word here, a look there, add a little subterfuge with Politeness Judo, and often no one ever finds out they were manipulated. Things they approve of always get done, things they disapprove of are somehow never accomplished. Such a character never loses her cool and can take anything life throws at her.

And should the time come to fight, she won't hesitate. She fights—bravely, courageously, and without holding back. She won't turn away from danger or pain. She'll deliver the final blow herself—with violence if necessary—but she'll always mix the violence with class.

In the Southern US, these women are known as Steel Magnolias. Beautiful, elegant, and symbols of their region; but they will take you down if you mess with them or their loved ones.

By its very nature, this trope is almost Always Female (although sometimes, a classy Crossdresser or The Dandy can also play the part, depending on the context). For the same reasons, there is no direct Spear Counterpart; the closest male equivalent is probably the Gentleman and a Scholar, who is likewise polite, cultured, and often badass without (necessarily) engaging in physical heroics or combat.

Compare Cultured Badass, More Deadly Than the Male, Badass Adorable, and Kicking Ass in All Her Finery. May overlap with Girly Bruiser, but not necessarily. Not to be confused with Nothing Up My Sleeve where silk sleeves are used to hide steel weapons.

For "Steel Hiding Silk", see the classical variety of Tsundere, or, more literally, Samus Is a Girl; Bruiser with a Soft Center is the gender-neutral opposite.

Alternative Title(s): Silk Over Steel, Proper Outside Powerful Inside