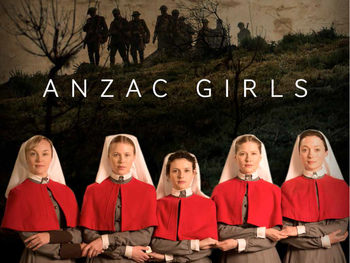 L to R: Grace Wilson, Olive Haynes, Alice Ross King, Elsie Cook, and Hilda Steele
"If only we could do more and had more to give."
— Matron Grace Wilson
Advertisement:

ANZAC Girls (2014) is an Australian miniseries detailing the lives and exploits of five real-life members of the Australian Army Nursing Service during World War I. Based on the nonfiction book The Other ANZACs by Peter Rees, it was made for the centenary of the war's outbreak and details the harsh, brutal, and bloody work of wartime nursing.

The five "girls" in question are:

All five were real women, with Wilson and Ross King in particular seen as giants in the history of Australian military nursing. The series covers their lives from their first deployment at war's beginning all the way through to Armistice Day, and details what happened to them afterward.