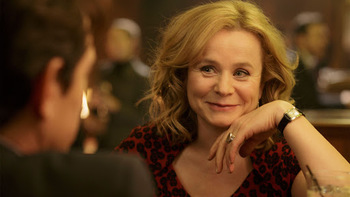 "Before I met you, I was a civilised woman."
— Dr. Yvonne Carmichael
Advertisement:

Apple Tree Yard is a 2017 British thriller Mini Series, based on the novel of the same name by Louise Doughty. Told in four parts, the series revolves around Dr Yvonne Carmichael (Emily Watson), a 40-something scientist who has grown dissatisfied with her monotonous life and dull, failing marriage. Then, she meets Mark Costley (Ben Chaplin), a handsome, charismatic and mysterious man whilst giving a presentation at the House of Commons. They share an instant attraction, which leads into a passionate affair. However, when a series of shocking events shatter Yvonne’s world, she finds herself questioning whether she ever truly knew her lover at all.