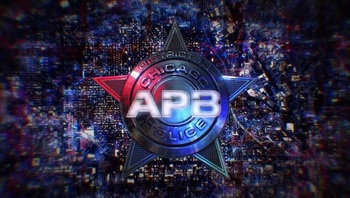 Crime fighting gets an upgrade.
Advertisement:

Billionaire tech genius Gideon Reeves inadvertently ends up in the middle of a convenience store armed robbery, only for his 911 call to be put on hold because the call center was understaffed. As a result of this, his best friend ends up getting shot and killed. Six weeks later, Reeves convinces the Mayor of Chicago to give him control of the police district in which the shooting happened, so he can attempt to find the killer and clean up the city by upgrading the department with state of the art technology of his own design, starting with a reporting and dispatch control system he calls APB.

Not to be confused with the video games APB: All Points Bulletin or the arcade game of the same name.