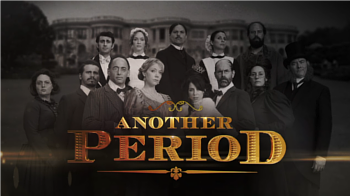 With Great Power Comes Great Insanity
I want the money, I want the fame
I want the whole world to know my name
This is mine, I gotta get it
Gotta get it, got, got to get it
Another Period
Advertisement:

What did spoiled, trust-fund attention whores do before television—much less the Internet—was invented? That is the premise of this Reality TV Mockumentary, self-described as Downton Abbey meets Keeping Up with the Kardashians, which aired for three seasons (2015–18) on Comedy Central.

It is 1902, and the Bellacourt family are the scions of ritzy Newport, Rhode Island—which doesn't stop social-climbing sisters Lillian and Beatrice (co-creators Natasha Leggero and Riki Lindhome) from being as lazy, greedy, self-centered, petty, and mean-spirited as possible to each other and everyone else. Then again, the entire household is pretty much batshit insane from top to bottom, from the extended Bellacourt clan to the army of butlers and chambermaids who serve their every deranged whim.

The show pokes fun at period-accurate attitudes regarding race, class, and sexuality, and somehow Crosses the Line Twice in every single scene.