From Dress to Dressing 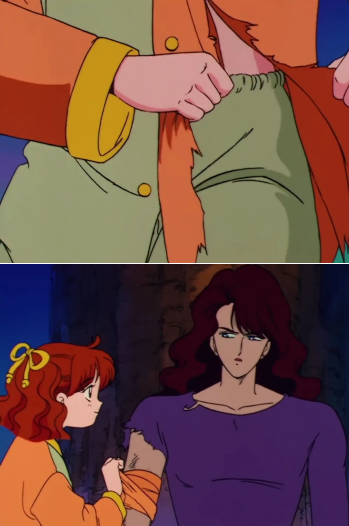 When miles away from a first aid kit, your jammies will do.
Somebody is injured and there is no hospital, drugstore, or first aid kit in sight. This leaves only one option, someone is going to have to tear off a piece of their clothing to make a bandage or sling to help patch up that wound.
Advertisement:

This is an action that, though seemingly a simple display of kindness, can say many things about the characters involved. If a character rips their clothes without hesitation, they're probably either a battle or survival pragmatist and if they do hesitate they could be a tiny bit vain or at least image-conscious. Or if said clothes were expensive and/or new, they are more mindful of the money they're wasting than the needs of others.

It also can be used to send romantic signals about the characters involved. It is not uncommon for the person ripping the clothes to be a girl and the injured party to be a guy she likes. The fact that it's usually a woman doing this can be seen as a form of mild titillation if played for fanservice.

A subtrope of Clothing Damage and Improvised Bandage. See also After Action Patch Up and Action Dress Rip.