Suck Out the Poison 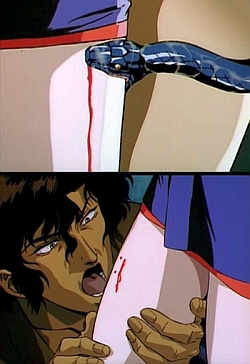 Now if a snake should bite you, don't you worry, fret or shout
Just call my name and I'll be there and I'll suck the poison out
"But what if I should sit on one and it gets me in the end?"
She said "That's when you'll find out, that I'm a real true friend."
— Benny Hill, "Rachel"
Advertisement:

Alice and Bob trek through a desert. Bob unwittingly steps on a snake - and, unfortunately for him, it's venomous. Immediately, Alice starts sucking out the poison to buy him some time before they find real aid...

Do Not Try This at Home. This used to be taught up until recently-ish, but as it turns out, A) All the bacteria in your mouth could cause an infection in the wounded person; B) Sucking out of a thin puncture will only make the area swell, and C) You're too late - the moment a person's heart beats after a bite, the venom is already circulating around their body anyway.

Note that this trope, like most snake-bite "cures", became popular because it seems to work. This is helped by the fact that people survive the vast majority of venomous snake bites even without treatment, and a large proportion of snakebites are 'dry', meaning the snake releases no venom anyway. So, someone gets bitten, someone else 'sucks out the venom' (even though there is no venom), and the person gets better (simply because most people do), and both parties become convinced that sucking out the venom works!

In reality, the currently advised First Aid for snakebites is to keep the victim calm, prevent them from moving, and arrange for them to be transported to the hospital. In Australia, a country packed with things that can and will bite or sting you at a moment's notice, pressure immobilisation bandages are also recommended.

May be used as a form of Intimate Healing. Similar to Kiss of Life, as both require pressing one's lips to an injured party's body, but since any part of the body can be poisoned, it's as likely to be gross or funny as sexy. A subtrope of Worst Aid.

When Popee and Kedamono are stung by a scorpion, Papi takes it upon himself to suck out the poison for them. Much to Popee's horror.

When Popee and Kedamono are stung by a scorpion, Papi takes it upon himself to suck out the poison for them. Much to Popee's horror.