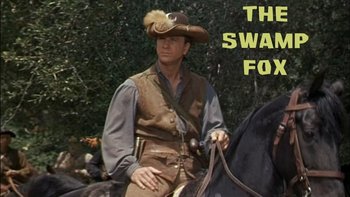 The Swamp Fox was a short-lived American series that aired as part of the Walt Disney Presents block (the 'Frontierland' segment). It starred Leslie Nielsen as The American Revolution figure Francis Marion, leader of a guerrilla band based in the South Carolina swamps. (It wasn't a comedy series; this was in the early part of Nielsen's career, when he was a straight dramatic actor—think Forbidden Planet rather than The Naked Gun.) A few other notable faces showed up in various episodes, including Slim Pickens as Marion's man Plunkett, and Tim Considine, of Disney and My Three Sons fame as Marion's nephew 'Young' Gabe Marion. Despite it being rather obscure, it did show up in several Disney comic anthologies and got a Disney coloring book at one time.

It only lasted eight episodes, but since it was rotated with other series in the program, it appeared to go on longer than if it had been a weekly program. It was, when looking at portrayals of the war, one of the few (along with perhaps The Patriot) to actually portray the war in the southern colonies.