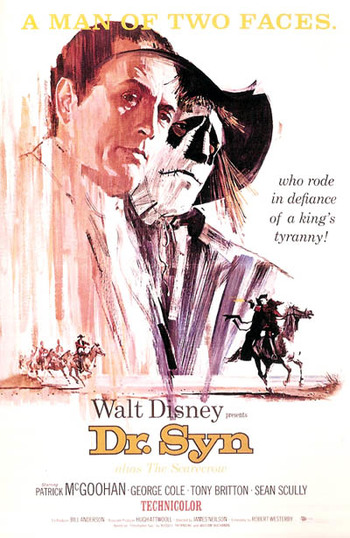 The Scarecrow of Romney Marsh (also known as Doctor Syn, Alias the Scarecrow) is a three-part series loosely based on Russell Thorndyke's Doctor Syn novels, made for Walt Disney's Wonderful World of Color in 1963 note  although the year is given as 1964 in the title card of the movie version. It starred Patrick McGoohan as the title character, George Cole as his Number Two Mr. Mipps, and Geoffrey Keen as his nemesis, the unprincipled General Pugh.

It bears little resemblance to the books it was based on — mainly because it's actually not based on the original novels by Russell Thorndike; instead, Disney based the miniseries on a novel called Christopher Syn by William Buchan which was itself based on The Further Adventures of Doctor Syn, the fourth book in Thorndike's series. Walt Disney even went so far as to claim that Doctor Syn was a real person when introducing each episode, despite the books having never been marketed as anything but historical fiction. Syn's Anti Heroic qualities are removed and the series makes no suggestion of his extensive, often rather dark Back Story from the novels. He is instead an ordinary, though highly intelligent, parish priest who decided sometime before the story began that the best way to help his parishioners would be to adopt a Secret Identity and become the leader of the local smuggler gang.

That said, it's a worthwhile production on its own merits. It was filmed on location on Romney Marsh rather than the usual California Doubling of the day, and Disney even funded the repairs to the church in the village of Old Romney so that they could use it as a filming location. The production is an Ur-Example of the Mini Series, being a continuous story told over three episodes, although the phrase hadn't yet been coined.

In the first episode, General Pugh arrives to bring the law down on Romney Marsh because the smuggling is cutting severely into tax revenues; meanwhile an American fugitive is fleeing from the hangman right into Syn's vicarage. The second episode deals with a traitor in the Scarecrow's midst as Pugh tries to ferret out who the smugglers are, and the third sees the Scarecrow's final confrontation with Pugh as the conscripted son of Squire Bates returns as a deserter.

Like many serials produced for Disney's anthology show at the time, it was edited into a feature-length movie for distribution outside of America, retitled Doctor Syn, Alias the Scarecrow. In 2019, the three parts of "The Scarecrow of Romney Marsh" became the first Wonderful World of Color episodes released on Blu-ray, and only the second serial from any incarnation of Disney's anthology show to reach that format.note Dinotopia, released on Blu-ray by Mill Creek Entertainment instead of Disney, beat The Scarecrow of Romney Marsh by three years.

"The Scarecrow of Romney Marsh" contains examples of: