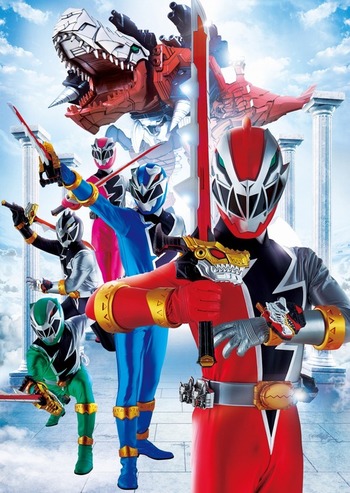 Kishiryu Sentai Ryusoulger (roughly translated as "Knightosaur Squadron Dino Soul Ranger" and is a pun on "Ryu Soldier") is the 43rd program in the Super Sentai franchise that aired from 2019 to 2020 and the first Sentai entry in the Reiwa Era.note It premiered during the Heisei Era, but the majority of its run occured during the Reiwa Era. It is the fourth dinosaur-themed installment in the franchise, following Kyōryū Sentai Zyuranger (1992), Bakuryuu Sentai Abaranger (2003) and Zyuden Sentai Kyoryuger (2013). This time though, the series' overall themes are also based on knights, and it is the first Sentai to be written by Junpei Yamaoka, a newcomer who is well known for writing J-Dramas (the most prominent would be Majisuka Gakuen).

Sixty-five million years ago, the Druidon Tribe sought to Take Over the World and at the same time, the Ryusoul Tribe took a stand against them. When a giant meteor fell onto Earth, ending the era of Dinosaurs in the process, the Druidon Tribe fled to space. The Ryusoul Tribe remained in Earth and made preparations for future threats by turning the remaining dinosaurs into the Kishiryu, before putting them into slumber.

As the Heisei Era comes to a close and the Reiwa Era is about to begin, the Druidon Tribe, now stronger than last time, returned to Earth to finish what they started. In response to this, the Ryusoulgers have resurfaced to fight them once again.

It aired alongside Kamen Rider Zi-O, and later Kamen Rider Zero-One in the Super Hero Time block, premiering on March 17, 2019, which makes it the first Sentai series since Gekisou Sentai Carranger to debut in March. On February 22, 2020, it was revealed that this series will become the 28th and 29th seasons of the Power Rangers franchise; on May 15 the title was announced as Power Rangers Dino Fury.