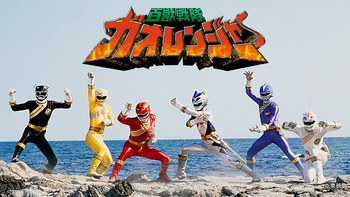 Wherever there is life, there is a roar of justice!
"Do you all know? This is the beautiful blue Earth that we all live upon. Many dangerous, dark beings have tried to destroy it's beauty. But don't worry, The Earth has courageous warriors that stand up to evil. Their passionate souls have protected this planet's beauty. Five people have inherited the souls of these warriors and continued the fight..."
The Narrator
Advertisement:

Hyakujū Sentai Gaoranger ("Hundred Beasts Squadron Gaoranger"note Gao is the Japanese word for "roar".) is the twenty-fifth installment in the Super Sentai, airing from 2001 to 2002.

A thousand years ago the evil Org spirits were fought by warriors backed by the Power Animals, but in the modern day Orgs begin to show up again. From the Animarium in the sky, the Power Animals choose five new warriors to fight them, and they're mentored by Animarium caretaker Tetomu and joined by one of the original warriors who was frozen in time.

Partnered with the Kamen Rider series Kamen Rider Agito before concluding its airing alongside the first episodes of Kamen Rider Ryuki in what would later be known as the Super Hero Time block.

The series can be streamed for free at Shout! Factory TV

Wherever there is trope, there is a roar of justice!