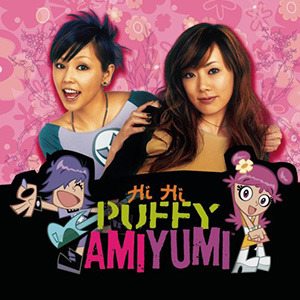 Anything is Possible!
Advertisement:

What happens when you're an animation studio executive who is a huge fan of Japanese Pop Music and really wants to see one of your favourite bands get more popular overseas? Well, first you get them to do the theme song for one of your upcoming shows. Maybe put some of their songs in a few episodes as well. Then, now that everyone is starting to get interested in who these musicians are, use that to justify making a fun little Band Toon.

Hi Hi Puffy Ami Yumi is a Cartoon Network original series based on the Real Life J-Pop group PUFFY.note (called Puffy AmiYumi in the States to avoid offending a certain trigger-happy rapper) Airing from November 2004 to June 2006, the show is very much a Widget Series, cataloguing the often bizarre adventures of the titular best friends/musicians and their manager Kaz as they travel around on a world tour. These can range from dealing with a deranged fan, to being possessed by the ghost of a dead drummer, to being dragged into forced labor in a third-world country, to time-traveling to the 1970s to become disco stars.

Produced for television by then Cartoon Network vice president Sam Register with the help of former Jellyfish member Andy Sturmer, who had previously worked with the real duo. The series was the only American television show at the time to be fully animated domestically, being done using Adobe Flash at Renegade Animation in California. Character design was done by Lynne Naylor, with her work garnering the show an Annie Award nomination. While the show did well enough in the ratings, Register's presence as the show's executive producer was arguably what kept it alive more than anything else. When Cartoon Network saw management changes in 2006, Sam Register was one of the executives that left the studio.note He'd spend the next several years as an executive at sister studio Warner Bros. Animation, before being made president of both Cartoon Network Studios and WBA in 2020. HHPAY ended production shortly after and its existence was unceremoniously scrubbed from CN's website. It is currently the only Cartoon Network show not to see all its episodes aired in the United States, be it television or streaming.