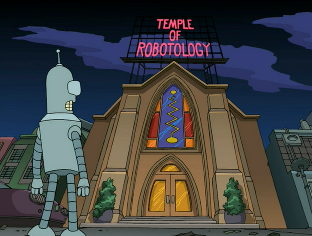 Humongous Mecha are awesome, in a very literal sense. They typically have more armor than a battleship, possess enough firepower to lay waste to cities, and tower over the battlefield like gods of war. When this awe leads to worship, you end up with the First Church of Mecha, in which these war machines are hailed as gods, or even praised as a deity in a full-blown religion. In some settings, these giant fighting robots may actually be gods.

May involve a Cargo Cult or God Guise.

This trope often overlaps with Merchandise-Driven, specifically when an author who wants to write fantasy lore ends up with a sponsor who wants to sell toy robots.

Alternative Title(s): Worship A Giant Robot As A God