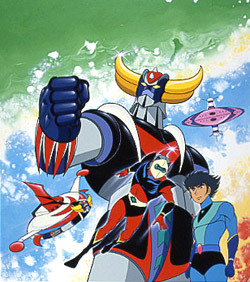 Duke and Kouji with Grendizer in the background.
"I love a lot of cartoon characters like Optimus Prime from The Transformers, Guyver and many more. But no one ever came close to Grendizer, I like Grendizer so much that I refuse to think of it as a cartoon. This show carried a lot of morals and emotions. Duke Fleed was a great character by all standards. He was a selfless loving person, even though he was bleeding of pain inside."
— Maxtoons.com

UFO Robot Grendizer (UFOロボ·グレンダイザー, UFO Robo Gurendaizā, sometimes romanized as UFO Robo Grendizer), known alternately by the names Grandizer, Goldorak and Goldrake, is a Super Robot Genre Mecha Show anime and manga created by Go Nagai, and the final series in the Mazinger trilogy, (chronologically set after Mazinger Z and Great Mazinger). It was broadcast on Japanese television from October 5, 1975, to February 27, 1977, and lasted 74 episodes. Three manga versions were produced, one of them written by Go Nagai and the others by Gosaku Ota and Eiji Imamichi.

Kouji Kabuto, hero of the the wars against Dr. Hell and the Mykene Empire, returns to Japan after a short stay overseas and arrives at the Makiba Ranch to meet Prof. Umon and talk with him about the recent trend of UFO sightings in Japan. There he meets the Makiba family and Daisuke, Dr. Umon's son, who comes across as a weird, lonely and taciturn boy. To add to the weirdness, when Kouji expresses his desire to make First Contact with intelligent alien lifeforms, Daisuke warns him that he can not be sure that the aliens he intends to meet are friendly.

Later, Kouji goes to meet an alien fleet that is hovering over the nearest city, but when he tries to communicate with them, he finds out... that no, they are not friendly. However he is rescued by an unknown Humongous Mecha that easily destroys the hostile fleet. Kouji right away suspects that Daisuke is the pilot. When he confronts Daisuke and Prof. Umon about it, they explain the next history.

A while ago, the Vega homeworld became unstable and fell into ruin due to its inhabitants overmining and overexploiting Vegatron, a powerful radioactive ore. Seeking to find another planet to settle on, King Vega's armies started attacking and conquering neighbor worlds, like planet Fleed, a highly advanced but peaceful and idyllic world. The Vegan Alliance easily succeeded on taking over the planet, but the Vegatron bombs that they used to annihilate the Fleedian army and cities turned the planet into an inhabitable radioactive wasteland.

The Fleedian Royal Family got murdered, but Crown Prince Duke Fleed managed stealing Grendizer, a Humongous Mecha built by the Vegan army using planet Fleed's resources to spearhead their next conquests (or depending on the version, the embodiment of the Fleedian god of war that the Vegans had seized before the war broke out) and escaping. Grendizer guided him towards Earth, and Duke was found by Prof. Umon, who took him in like his son and assisted him in hiding Grendizer. Taking the identity of Daisuke Umon, Duke started working in the ranch and tried leading a normal life, forgetting his past.

However the coming of the Vegan Alliance is about to put an end to his peaceful life. Duke hates war and fighting, he likes his new life and he just wants to be normal, but if he does not fight his adoptive world will become another poisoned Crapsack World. And if he ran and abandoned his home again, he would be unable to stand it (he already got a pretty severe Heroic BSoD due to leaving Fleed).

He ran away once. NEVER AGAIN.

Grendizer was well-received in countries like France, Italy, Canada (in French), the Middle East, Greece and Russia (but not in Japan, and in countries in which the previously two series were broadcasted first, due to the differences in concept and story). When it was shown in the US, it was Macekred into Grandizer as part of the Force Five syndication block. Two episodes of Grandizer were released on VHS in America; it is otherwise hard to get in the US.

Character Sheet is now in construction.

A new comics, titled Goldorak, was created by a French-Belgian team of authors (Dorison, Bajram, Cossu, Sentenac and Guillo) with Go Nagai's green light, and published on October 15, 2021. A video game adaptation developed by Endroads, published by Microids is planned for 2023.