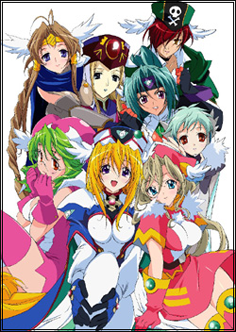 The princesses of Valhalla planet.
"It's no guess. It's for reals."
—Spottenheim
Advertisement:

UFO Princess Valkyrie is a 2002 manga created by Kaishaku (of Steel Angel Kurumi and Destiny of the Shrine Maiden note  Kannazuki No Miko fame) for Square Enix's Monthly Shonen Gangan, it was later adapted by into an anime by TNK that same year.

The story is about magical princesses from outer space. One of said princesses, namely Valkyrie, lands her spacecraft on the Tokino Bath House, killing its current manager, the teenage Kazuto Tokino. So in order to save his life, Valkyrie gives him half her soul. Thus the obviously adult Valkyrie is transformed into a young girl who looks and acts like a child.

Valkyrie and her fellow princesses have magical powers. So whenever Kazuto and his crew encounter any problems, she is able to transform and protect him.

Aside from causing Kazuto and his sister Rika financial problems by damaging the bath house, Valkyrie has caused problems for her sister Hydra. Valkyrie ran away because she was supposed to marry a man she didn't love. Hydra, as the second oldest unmarried princess, is going to have to marry him if Valkyrie doesn't, so she goes to Earth and wreaks havoc trying to find Valkyrie. Eventually, she is stopped by Kazuto's shrine priestess neighbor and childhood friend, Akina Nanamura, who turns her into a little girl (like Valkyrie, but with her adult mind) so she is "easier to control". Also, Hydra crashed into Akina's shrine, and Akina keeps her around so she can "work off the damage".

Akina is also a childhood friend of Kazuto and has a secret crush on him, often putting her at odds with Valkyrie. So she and Hydra are sometimes partners in crime to cause problems for Kazuto and crew.

Later, Sanada, a catgirl maid of the royal family of Valhalla, the planet whence comes Valkyrie and Hydra, returns looking for Valkyrie. She is not shocked by Valkyrie's new appearance; in fact, she finds the new Valkyrie intolerably cute. Sanada takes her mission to protect Valkyrie to extreme lengths, including, for example, turning a bunch of ordinary girls who talk even indifferently to Kazuto, into mindless catgirl servants for the Tokino Bath House.

The show is light (mostly) in nature and is kind of a slice of life show. There are four seasons, of varying length. The second season is more serious and dark than the others, mainly because of Valkyrie Ghost, a mysterious figure who appears to Kazuto.

This is a fun show to watch for its comedic elements. Additionally, it contains many instances of fanservice. (After all, it takes place in a bath house.)

Welcome to the crazy world of UFO Princess Valkyrie, where alien (though humanoid) princesses run wild and cause mass chaos among Earthlings.

Theme songs and insert songs are by Melocure and the background music was composed by legendary composer Kenji Kawai.

The series was licensed by ADV Films (who retitled it UFO Ultramaiden Valkyrie) and later Funimation. note  at least for the OV As, which the rescued when ADV lost a bunch of their licenses in 2008