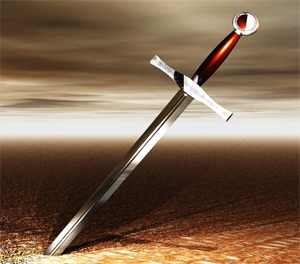 Merrill: How did you learn to do that thing with the knives, Tallis?
Tallis: Throwing them?
Merrill: Yes. Isabela does that sometimes, too. How do you keep it from hitting someone hilt-first and just bonking them on the nose?
Tallis: Oh, that happens all the time, actually. You just act like you meant to do that. Which is really hard sometimes and ruins the moment.
— Dragon Age II
Advertisement:

Have you ever noticed that when you drop a piece of toast, it will always land buttered side down? (Wait, you haven't? But never mind.) Well, if media is to be believed, something similar happens if you drop or throw a weapon — it will always land pointy side down. And not only that, but it will always penetrate the ground at a neat angle between 90 and 45 degrees and stay upright. Why? Because it looks cool, of course!

In more ridiculous instances, this will even apply to blunt weapons like staves.

Depending on the type and quality of the special effects, this can be justified a bit; the padding that the faux blade rests in once it's hit an actor needs to keep the blade there for a bit, and a 90-degree angle does this easiest since it gives the blade more support.

Can be Truth in Television sometimes, but only if the pointy end is heavier, which is common on cleaving weapons like axes but not with certain swords, since the center of balance of a thin sword like the one in the page picture is close to the hilt. However, even in balanced swords, the pointy end is so much longer that with enough spin, it is still likely to strike blade-first, if perhaps not point-first; so long as the blade travels less distance in the course of one revolution than the difference in length between the blunt and sharp ends, the sharp bits will always hit first.

Knife-throwing is another example commonly seen in fiction, but in reality, it takes a bunch of practice to do correctly, as judging rotation and distance is extremely difficult. Balanced throwing knives are preferred by professional throwers, as both handle and blade heavy knives have slightly different rotation patterns that require the thrower to adjust for. A balanced knife can be thrown either with a handle or blade grip. For unbalanced knives, the technique is to grip opposite of the heavy end, so the weighted end gets thrown first. This is because it's more difficult to generate consistent rotation when you throw with the lighter part leading.

When the sword is used to climb, stand, or swing off of after penetration, it's also Stepping-Stone Sword. When thrown intentionally, may overlap with Throwing Your Sword Always Works. When physically driven into the earth by hand, it's a Sword Plant.