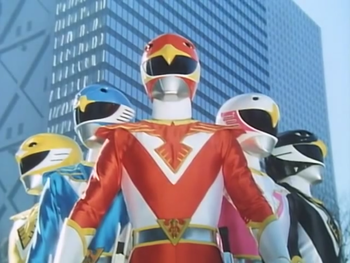 The Power Rangers... but not as you know them.

A 40-episode fanfic adaptation of Choujin Sentai Jetman. An Air Force soldier and four apartment tenants from Spring Valley, CA receive military hardware from Project: Jetman and become the Power Rangers, to fight against a vengeful space vampire and others who seek Earth's destruction.

It can be read in its entirety here

Other tropes in use include: