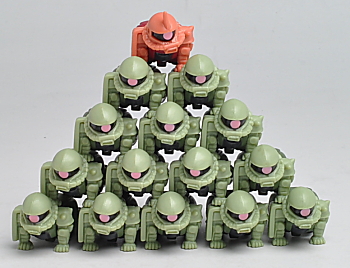 Why the red goes on top.
"Yeah... he took the red one."
— Nameless alien security officer, Lilo & Stitch

Which colors are better depends on what you're doing. For instance, let's say that you want to make some really good toast. But all you have is a crappy plastic toaster with a handle that sticks down. You don't have enough money to buy a new toaster, so how do you get the perfect toast you want?

Simple: paint the toaster red. The resulting toast will be three times better than normal toast. Red also makes every video game enemy three times stronger. The Red Shirt can be a case of some colors being worse: they go down faster.

While red is one of the most common colors to receive this treatment, it isn't the only one. It's generally held that the rarest color in a work will be the "best" one. A guy dressed all in black will always defeat opponents clad in lesser colors. Gold is always better than silver (unless you're dealing with werewolves), and silver is always better than bronze. Since bronze and gold are sometimes the same color, it makes for a complicated hierarchy.

Related to Colour-Coded for Your Convenience, Chromatic Arrangement, Power Glows and Color-Coded Item Tiers. For tropes concerning specific colors being better, see Red Ones Go Faster, Red Is Heroic, Blue Is Heroic and Primary-Color Champion, Golden Super Mode, Purple Is Powerful, Emerald Power, Gold-Colored Superiority and Gold and White Are Divine. For when colors are worse, see Red and Black and Evil All Over, White Shirt of Death, and potentially Red Shirt.