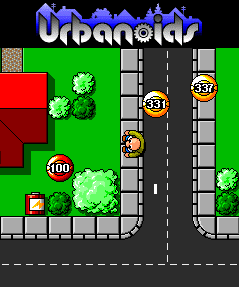 Urbanoids is an Action-Adventure game with Strategy Game elements built on Java by Karl Hornell released in 2000.

You play as Erwin O'Skunk, an out-of-work TV repairman, who wakes up from a party-induced hangover and realises he has to deal with robots as his town has been almost completely evacuated. Possessing a weapon, a toolbox, some protection, and clothing, he feels like he can handle this crisis... or at least die trying.

You select one of four towns, which you explore and make sure to shoot down every last remaining robot. You can hack robots to increase your firepower and gain the ability to kill stronger robots. However, failing to do so causes you to die and your hacking abilities depend on the robot you're using, so it's risky.