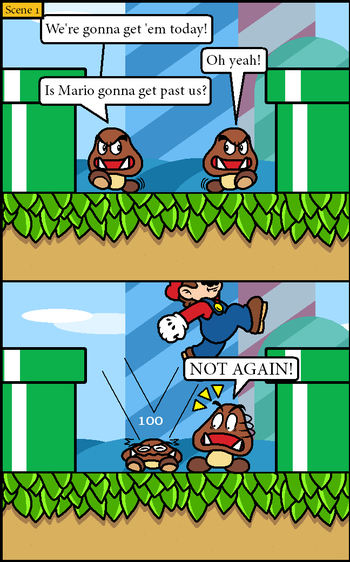 Over 30 years and counting, and they still get beaten easily.
Image

.
"My assignment is a grassy hill beside a massive cleft
They told me when the plumber comes to 'just keep moving left'
The bastard finally showed up, so I marched without delay
But he just jumped right over me, continued on his way!
At no point in my orders did they mention moving right!
So I stepped right off the edge, filled with paralytic spite."
— Yahtzee Croshaw, "Cabin Fever"

A type of Video Game Enemy. The Goomba is the weakest and/or most basic enemy in the game. They have simplistic movement patterns, are reassuringly easy to beat, and will almost always be one of the first enemies encountered in the first level. They are the meekest and mildest of Mooks designed to teach the player about the game's combat mechanics; stomping, slicing, or blasting one of these guys for the first time marks the moment where the person holding the controller really starts playing the game.

Their ubiquitous status can lead to them becoming mascots for the work in question and they are likely to come in multiple (often stronger) versions. Sometimes their lowly cannon-fodder status is even subverted by making one of these stronger versions found later in the game be one of the toughest enemies in the game. Other times, they can become dangerous depending on how many of them there are. Even if an enemy is weak, if being attacked by one takes one hitpoint, then being met by 100 poses a problem.

In any game where monsters are recruitable these guys will usually be the Com Mons, recruitable very early on and useful in early stages of the game, but quickly becoming outclassed once stronger monsters start appearing. Though they may have some gimmick that makes them more viable under special circumstances.

The Goomba is often simplistic in appearance, suggestive of a nuisance rather than a genuine threat. They can easily be Adorable Evil Minions. The Waddling Head is common Goomba-type enemy found in Platformers. In western fantasy Role Playing Games, goblins and giant rats most get this role. While in Japanese Role Playing Games and fantasy games, (thanks in part to Dragon Quest's popularity) slimes have been elevated to this role.

The Trope Namer is from Super Mario Bros. In an interview it was revealed

that they were actually created at the end of the game's development, because the other main enemy in the game, the Koopa Troopa, required a two-step process to defeat, and the developers wanted to give players something simpler to beat.

Note: the term "goombah" is still a live piece of offensive slang in the Northeast of the U.S.; use with caution around Italians stronger or meaner than you are (unless they are gamers, but especially if they're plumbers), or if you just plain don't want to be a jerk. The word in itself isn't offensive (it's a southern Italian dialect form of compare, "friend"), but using it to anyone who isn't actually an extremely close friend (the sort of friend you'd ask to be in your wedding, or to be the godfather of your child) is at the very least presumptuous.