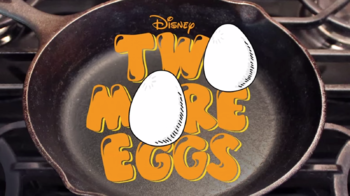 Two More Eggs is a series of short cartoons made by The Brothers Chaps (of Homestar Runner fame) that were commissioned by Disney XD to air during commercial breaks.

It lasted 2 seasons from 2015 to 2016, with a 3rd retooled season in 2017note (consisting entirely of Hector & Kovitch and Panda Bractice shorts). New shorts were uploaded to Disney XD's YouTube channel every Tuesday. They can be watched here