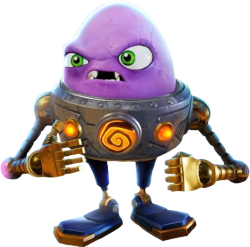 This guy looks like he won't crack so easily.
When some animals give birth, they do so in the form of laying eggs. However, these eggs start out essentially lifeless. It takes some time before the living being that is inside will come out of them.
Advertisement:

In media though, there are characters that are living eggs with a face and possibly legs. These eggs aren't necessarily likely to hatch into anything else, but most of them are still just as fragile as a regular egg, and they know this for a fact. As such, they often take as many precautions to make sure they don't accidentally shatter.

There may or may not be some crossover with Eggshell Clothing, in which the egg itself isn't alive, but the character "wears" it so they look like a walking egg.

The version with limbs may resemble a Cephalothorax.

Subtrope to Anthropomorphic Food. Not to be confused with the main antagonist of the Sonic the Hedgehog franchise, Dr. Eggman, the walrus, nor closeted Transgender folk.