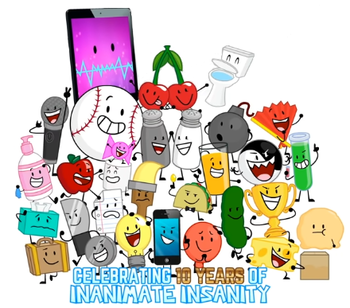 Inanimate Insanity, is an animated series on YouTube created by AnimationEpic (Adam Katz). Its premise is inspired by Battle for Dream Islandnote which, in turn, was inspired by Total Drama, which was in turn a parody of reality TV/Survivor - a cast of Animate Inanimate Objects compete in a series of challenges in order to win the grand prize of 1 million dollars, all overseen by a living MePhone4.

The first season (which ran from 1st April 2011 to 8th December 2012) has been completed and ultimately featured 16 contestants. The second season is currently ongoing - 8 members of the old cast return alongside 12 new characters. It also features a slow shift in tone towards drama.

A Spin-Off comic series, known as Inanimate Comics, was released on July 8, 2020. It can be viewed on the official website

On September 26, 2020, a Spin-Off animation series named Fan's Fantastic Features was released, following Fan interviewing the eliminated members of Hotel OJ. So far, four episodes have been released and can be viewed here

On April 3, 2021, a third season, Inanimate Insanity Invitational, premiered while Season 2 is still in progress. That's right, two seasons running at once.

The official playlists for season 1

and the full series

can be found on AnimationEpic's channel.