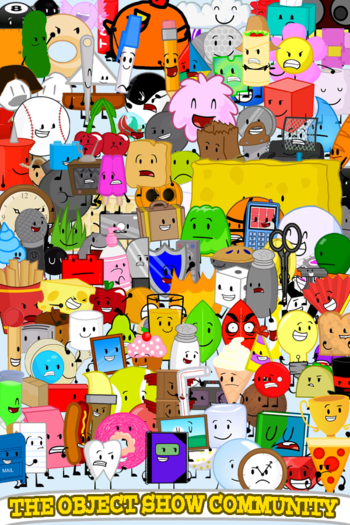 And this is only scratching the surface.note Contains characters from Battle for Dream Island, Brawl of the Objects, Inanimate Insanity, Object Mayhem and Object Overload
Object shows are a series of web-animated cartoons starring a cast of living inanimate objects. Typically, it involves these objects participating in Total Drama-inspired competition game shows for a prize with the setting usually taking place in vast, open fields of unknown location. Cast-wise, it invokes all the stereotypes known in reality TV which includes, but not limited to, the Sadistic Gameshow Host, the Jerk Jock, the Nerdy Intellect, the Casanova Wannabe, the Nice Guy, the Chew Toy (Characters who constantly die or get unjustifiably hated on) and the
Advertisement:
Valley Girl.

The first-ever object show was Battle for Dream Island (BFDI), created by The Huang Twins, Michael and Cary Huang, and released on the 1st of January 2010.note However, it's Older Than They Think as it originates from the unpublished Firey and Total Firey Island books from May and September 2008 respectively, made by the same people BFDI has its first episode garnered over 60 million views to date, signifying the popularity of the show. Later on 1st April 2011, Adam Katz released Inanimate Insanity (II), the second major object show,* Contrary to popular belief, Inanimate Insanity is technically not the second but third object show in existence. That honor goes to an obscure lost show called Total Fruit Island released somewhere around December 2010, four months before Inanimate Insanity. which would find major success and a sizable fanbase although not as comparable to BFDI. From these two shows, it would spawn countless other similar object shows and form the backbone of many common tropes found on these shows as the norm.

However, some object shows deviate from the source material to form their own sub-genres such as the Slice of Life comedy and the action-adventure instead of competition-based ones while others are more mature than the usual kid-friendly fare like the gory bloodbath known as Object Terror which tend to be more controversial. This also gives rise to a new sub-genre called "Joke Shows" - described as unconventional object shows with nonsensical plots, joke characters (aka non-objects), deliberately bad humor and Stylistic Suck that pokes fun at traditional but run-of-the-mill shows. Almost forgot, there are object show camps like The Race of Children (TROC), Ten Words of Wisdom or CRAPThatsCool, where people can participate as their own object characters and play against each other.

The term "Object Show" coined for these cartoons likely originated from this video.

The avid fanbase and creators of Object Shows are collectively known as the "Object Show Community" (the OSC for short). Although the staggering numbers in Object Shows are a sight to behold,note Currently, there are about 1040 recorded cases since 2010 and 123 of them are on this very page this can't be said for its popularity with the exception of BFDI and II.

While quantity is ever so high for these shows, the quality varies as evidenced by its tendency to go into Development Hell on such short notice. If it doesn't complete its first (or at least newest) season at best or goes past the first few episodes at worst, an object show can otherwise be cancelled from lack of interest or various external factors with no word on renewal.note Luckily, there are cases where the creator changes their mind and revives their object show via Continuity Reboot or Soft Reboot but even that can fall flat sometime afterwards.

In short, Object Shows are considered a niche genre, small enough that it is not well-recognized in mainstream culture but large enough to have a massive fanbase enjoyed by all ages worldwide.

Most of these object shows can be found on YouTube and various sites as well. Many object shows have their own wiki too.note But depending on the show's popularity and how active the editors are, the information can be well-informed and expanded on or lackluster and desperately needs love.For those wanting to binge-watch multiple shows, check out Cloudy TPOT's

which also shows more obscure, lesser-known object shows that regularly update when an episode is released.