Jumping Out of a Cake 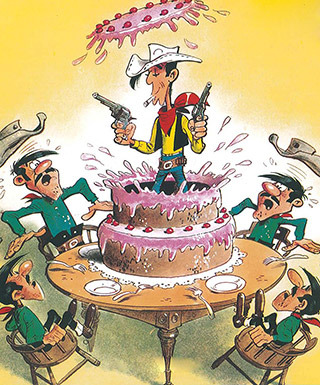 "Hold it right there, slick. I don't do cakes. I don't bake 'em, and I don't jump out of 'em."
— Shego, Kim Possible
Advertisement:

When a giant cake (actually a cake shell) has a person (usually a bachelor party stripper) hidden inside, so he or she can jump out of it for dramatic effect.

Girls have been jumping out of cakes since Evelyn Nesbit did it for millionaire playboy Stanford White in The Gay '90s, but the practice of enclosing a living creature inside a cake or pie shell goes back to medieval days. It's (possibly) the origin of the nursery rhyme "Sing a song of sixpence", where live blackbirds are put in a pie shell for a king's feast.

Mostly Played for Laughs, especially if the cake is at an unexpected (and inappropriate) place (like a child's birthday party) or the stripper inside is replaced with someone else (a cop, an Abhorrent Admirer who crashed the party to get her object of desire, an angry fiancée or wife who suspects that her husband will have too good of a time at his buddy's bachelor party, a Dirty Old Woman who used to be an adult entertainer when she was young and is still entertaining in her autumn years, a cross-dressing Camp Gay man who decided to come out of the cake — and the closet — all in one night, or a heterosexual man who was dressed in drag and put in the cake as a cruel joke). In more cartoonish works, the cake might be an actual one, causing the party-goers to be splattered with frosting and cake bits when the person inside jumps out.

Sometimes played for drama (or really dark comedy) if the man of the hour is Too Dumb to Live and thinks the novelty cake is a real one (and cuts it, either injuring or killing the girl inside), if a Mafia hitman is inside the cake and shoots everyone at the party (though it can be softened up to being funny if the hitman is dressed in outrageous and obvious drag), or if the stripper dies of suffocation inside the cake and no one realizes this until it's too late.