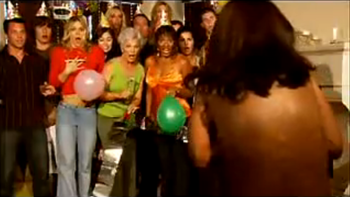 The question is: Who was more surprised?

The door burst open she stood there,
With all of me mates from the docks,
And they all sang "Happy Birthday to You,"
And all I had on were my socks.
— Benny Hill, "Anna Marie" The Benny Hill Show
Advertisement:

Nakedness. Nobody ever gets tired of it. The exact reasons for being naked are irrelevant, for inevitably the time must come when we must end this plot. Cast aside the foolishness of a naked person traipsing around the universe gay as a chickadee, and finally have them safely at home where the nakedness can bother no one and so-

Well, so much for the comfort and all that. Looks like at just the right time, nakedness has become funny again. Because after all, as far as embarrassing humor goes, it's hard to top having all your friends and family see you without any clothes on while celebrating your arrival into this world (amusingly enough, in the same state as you were back then).

Usually the disrobing happens for a deliberate reason. The character in question is under the impression that he or she is about to get some. Oh, you adorable sex hounds! Obviously, this does not show up so much in G-rated versions, which rather involve Naked People Trapped Outside.

This trope is based off an old story, as Snopes explains here

. The Reveal of the surprise guests almost always ends the story — very rarely does the party happen and then we see what happens next.

See also Caught with Your Pants Down. Compare Open the Door and See All the People. A Naked Freak-Out is an entirely justified reaction. It's nearly always a birthday party, making this a subtrope of Birthday Party Goes Wrong.