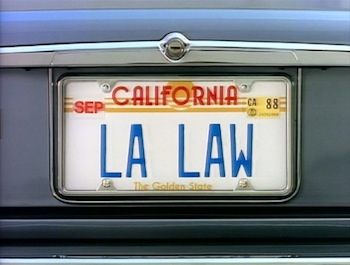 "I heard the U.S.S.R. will be open soon
As vacationland for lawyers in love."
—Jackson Browne, "Lawyers in Love"
Advertisement:

A legal drama created by Steven Bochco and Terry Louise Fisher and airing on NBC from 1986-1994, about the antics at a fictional Los Angeles law firm, McKenzie, Brackman, Chaney and Kuzak.

The original main characters were:

(Benny Stulwitz, the office messenger is not included here as in the first season he was only credited as a guest. Nor is Jonathan Rollins, who was introduced in the second season and continued his role until the end of the series.)