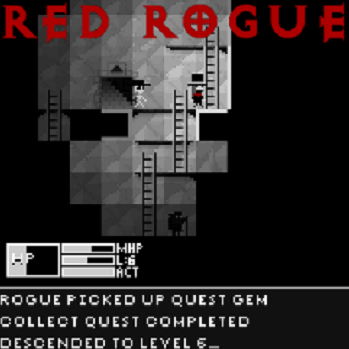 Red Rogue is a 2012 Platform Game/Roguelike hybrid made in Adobe Flash, which pays homage to Rogue. In it, you play the widowed lover of the original protagonist @ whose revenant accompanies you through the Dungeon of Chaos to, yet again, retrieve the Amulet of Yendor to use its power to restore him back to life.
Advertisement:

The game differs from the original being in a side-scrolling platformer, with the exception of jumping. Check out the official website here

; there you'll find the official soundtrack, some places to play it online, a download link, the source code and even the .swf for your hosting/modding leisure.