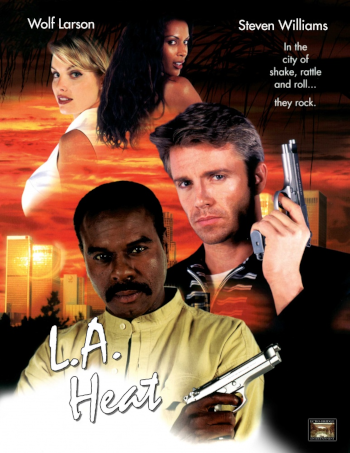 "They'll do whatever it takes to keep L.A. safe...even if it means blowing half of it up."
Advertisement:

The series began filming in 1996 in Southern California, in locations that included Los Angeles (also Long Beach, Beverly Hills and Hollywood) and San Diego. However, because it didn't have the backing of a major US network, it was not picked up for domestic distribution. Instead it was sold overseas, and it became popular in Europe. Due to PM Entertainment's financial troubles, the production ended in 1998 after two seasons (and 48 episodes). On March 15, 1999, the show finally made its US premiere when it was sold to TNT cable network. The episodes were shown on weekdays at 6 PM, and its first run concluded on May 19, 1999. When TNT's contract to run the show expired, the show disappeared from the airwaves and has not aired on US TV ever since.

It follows the classic Buddy Cop Show format. Naturally, the detectives are a Salt and Pepper Odd Couple:

Also prominently featured were their girlfriends: