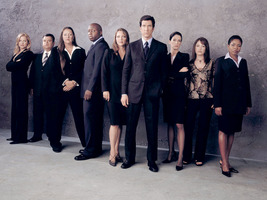 "When we first started, it was just Bobby and me, and he was so wide-eyed, every case. And if it was a murder case... God, the light coming out from his eyes... It didn't bother him a bit if the guy was probably guilty. He'd say 'Bec, we defend the guilty because ultimately it protects the innocent'. And now... he hates it when they're innocent. It's too much pressure. That's why none of us last in this job. You can only bear it defending the guilty. And how long can anyone last doing that?"
— Rebecca Washington
Advertisement:

Law Procedural by David E. Kelley about the "sleazy" Boston law firm of Donnell, Young, Dole & Fruttnote Initially known as Robert G Donnell and Associates, eventually known as Young, Frutt & Berluti, known for their high quotient of scummy clients and ethically questionable tactics. However, each of the characters at some point reveals having their ideals, with long speeches defending what they do and how they do it.

In its original form, it was a straight series of literate and intelligent courtroom dramas. Around the middle seasons, the show shifted substantially towards criminal drama, often featuring the now almost reputable firm being plagued by its dirtier former clients. In the last seasons, the show started focusing more on the characters' personal lives, both in and out of court (see One of Our Own), and developing increasingly far-out plots with criminally insane clients rather than just sleazy ones, a move that did not prove popular with audience or critics.

This shift ended in a conclusive Retooling in the last season. The network gave David E Kelley an ultimatum, either drastically reduce the cost of the series per episode or face cancellation. Kelley chose to fire most of the main cast, including the lead character, and replaced them with James Spader as Alan Shore. What resulted was a partial return to form in the vein of the earlier seasons, albeit at the total expense of most of main characters (what happened to most of the departing members was never given an explanation). Near the end of the final season, Kelley was given the choice of either continuing the show or developing a spin-off around the Alan Shore character. What resulted ultimately became a Poorly Disguised Pilot for its Spinoff, Boston Legal.