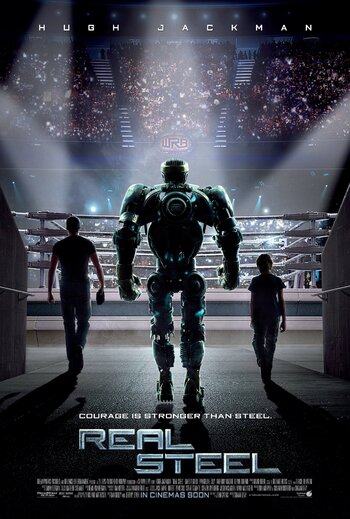 "Times have changed. Fighting has changed — but the crowd, they never change. They just get bigger."
— Charlie Kenton
Advertisement:

Real Steel takes place 20 Minutes into the Future, where human boxers have been supplanted by robotic warriors who can dish out and take far more damage. Former boxer Charlie Kenton (Jackman) now works on the outside of the ring as a robot handler with his girlfriend Bailey (Lilly), exhibiting in town fairs and underground robot fights to make ends meet, when he suddenly gets his estranged son Max (Goyo) dropped in his lap after the boy's mother dies.

Needless to say, neither Charlie nor Max take well to this at first, but they slowly manage to bond over Atom - an obsolete robot they find in the junkyard after Charlie's previous 'bot gets trashed, with the ability to mimic the moves of others and the resilience to survive just about any punishment. Together they rebuild Atom and train him to fight, aiming for the championships through the underground scene for Charlie's last shot at a comeback.

Executive produced by Steven Spielberg and Robert Zemeckis, although not directed by either (step forward Shawn Levy).