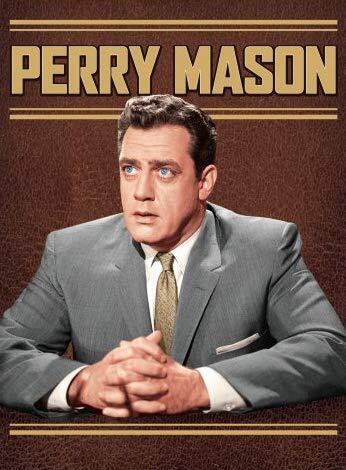 "Who can we get on the case?
We need Perry Mason
Someone to put you in place
Calling Perry Mason again"
— Ozzy Osbourne, "Perry Mason"
Advertisement:

Perry Mason is a hugely successful multimedia franchise of the twentieth century. Beginning as a series of best-selling novels by Erle Stanley Gardner in the 1930s, it has been adapted for film, radio, an iconic and influential 1950s-1960s TV series starring Raymond Burr, a failed 1970s TV reboot, a series of TV movies in the 1980s and 1990s that brought back the cast of the Raymond Burr show, and finally another TV reboot in 2020 starring Matthew Rhys.

Mason is a skilled defense attorney who takes on seemingly hopeless cases, and turns them into victories by investigating the mystery, with the help of his secretary, Della Street, and private detective Paul Drake. Then, in a dramatic courtroom scene, Mason's new evidence is introduced, and the real criminal is forced to confess. Usually while on the witness stand.

There were eighty novels in the series by the time Gardner died in 1969, and two more were published posthumously. The first was 1933's The Case of the Velvet Claws, and the last was The Case of the Postponed Murder.

Seven movies were theatrically released between 1934 and 1940; the first four all starred Warren William as Mason. The final movie retooled the Perry Mason concept beyond all recognition into the western crime comedy Granny Get Your Gun. Yes, really.

The radio series began in 1943. It focused more on action than courtroom drama, and Gardner eventually withdrew his support for the show, which then went on to be adapted into the television soap opera, The Edge of Night.

The original Perry Mason TV series debuted in 1957, and ran through 1966. It featured Raymond Burr as Mason, Barbara Hale as Della Street, and William Hopper as Paul Drake. It was, at the time, the longest-running, and most successful lawyer show on television, and is still what most people think of when they hear the name.

The TV series was revived in 1973 as The New Perry Mason, with a completely different cast led by Monte Markham, but it only lasted one season. It was then revived again as a made-for-TV movie, Perry Mason Returns in 1985, with the surviving cast of the original show, plus William "The Greatest American Hero" Katt as Paul Drake Jr - a slanted case of Real-Life Relative, as Katt was the son of Barbara Hale. The success of this TV movie spurred the production of twenty-nine more Perry Mason TV movies between 1985 and 1994, with the last installment airing after Raymond Burr's death in 1993 (NBC made four A Perry Mason Mystery Spin-Off TV movies without Mason himself before calling it quits).

The series is very popular overseas—a Turkish version (also called Perry Mason) was produced in 1983. It also inspired a song by Ozzy Osbourne.

In 2020, HBO started airing a new series starring Matthew Rhys that is considerably Darker and Edgier and Film Noir-ish than the previous shows. The first season serves as an origin story for the Perry Mason character and is set in The '30s in Los Angeles.

Many episodes of the 1943-1955 radio series have fallen into the public domain in the United States, and can be downloaded courtesy of the Internet Archive

Is the Trope Maker of the following tropes:

Perry Mason works with their own pages:

The other instances were: