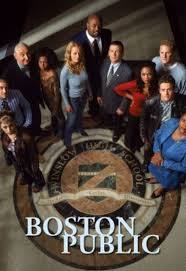 A comedy-drama series created by David E. Kelley and airing on FOX, Boston Public basically told the story of the Teen Drama from the point of view of the teachers. It took place in Winslow High, a public high school in Boston, hence the show's title. Boston Public was basically Degrassi in America!, except the teachers are the troubled ones.
Advertisement: