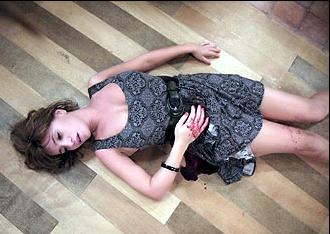 Who killed Giselle López?
Botineras was a 2009 Argentine telenovela, set in the world of football. "Botineras" is a term used for the women that seduce football players, and became rich with them. It began as a comedy, and shifted into a police procedural afterwards.
Advertisement:

The main character is Christian "Chiqui" Flores, who was playing in Spain and returns to Argentina to get married with his girl, Marga Molinari. He returned to the "Club Deportivo El Cristal" (fictional). Cappa, a Spanish player rival of Flores, had been killed under unclear circumstances, so the police had to investigate him. For this purpose the agent Laura Posse arranges a secret identity as a "Botinera", helped by Giselle López (who run an agency of such women), and is renamed as "Mía".