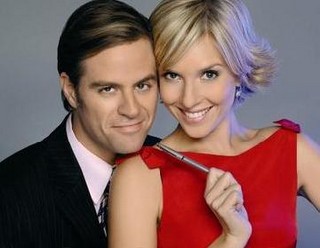 "You want news, you've got them."
—Martín Pells
Advertisement:

Los exitosos Pells (in Spanish, "The Successful Pells") was a 2008-2009 Argentine telenovela.

The Pells are Martín Pells and Sol Casenave, the main hosts of the "Mega news" news channel, who are a happy married couple as well. But when the lights go off, things are not that nice: Martín Pells wants to leave Mega News and sign instead for rival channel "M Noticias". His boss Franco Andrada attacked him and left him in a coma, and escaped. And then, he found a poor actor, Gonzalo Echagüe, that was exactly like Martín Pells. He hired him to impersonate Martín Pells, both for the TV and in his private life, so that nobody suspects the fate of the real Pells. But, after accepting the deal, Gonzalo discovers that the "happily married" couple is just for the cameras: Martín and Sol are distanced, she is in love with a news reporter, and Martín has a gay relation with Tomás Andrada, the son of his boss.

It is later revealed that Martín and Gonzalo are not so similar because of a cosmic coincidence, but because they are twin brothers, separed at birth.

Gonzalo Echague actually falls in love with Sol, and try to seduce her with his "real" identity. It works, but when he reveals the whole charade, she does not believe anything, and considers that he's Martín pells playing a cruel joke on her. Without solid evidence of his real identity or knowledge about the location of Martín, Gonzalo can not get her to trust. He finally proved it when he is temporarily awaken by Andrada, Gonzalo discovered that and followed him with Sol, who saw the both Pells.

Franco forbids Gonzalo to be with Sol or to announce the whole charade to the public, and tries several things to force him into obedience. Martín Pells awakes again, and join forces with Gonzalo and Sol. In the end, Martín goes with Tomas to a distant country, and Gonzalo stays with Sol, still acting as Pells to the cameras.