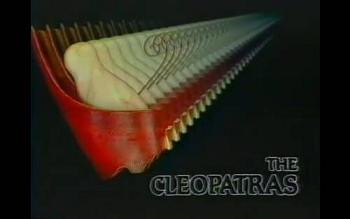 The Cleopatras is an eight-part historical miniseries produced by The BBC in 1983 and written by Philip Mackie (whose previous historical mini-series writing credits included The Caesars for Granada in 1968). The series opens up with Cleopatra VII (the one most familiar to us—the one who later fell in love with Julius Caesar and Mark Antony) being told the stories of all of the other Cleopatras in her family (her mother, aunts, grandmothers and great-grandmothers) via a history lesson. After the histories of all of the past Cleopatras have been explored, the story continues to detail the life of the last of the Cleopatras, who committed suicide via asp bite after losing the Battle of Actium.
Advertisement: