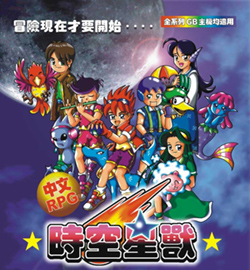 Shi Kong Xing Shou ("Space Time Star Beast" or "Mythical Beasts of the Starry Sky") is a Chinese bootleg game for the Game Boy Color that mimics the massively-successful Pokémon series. It was developed and published by Vast Fame, an unlicensed Taiwanese company that is often praised for the high quality of their bootleg titles, featuring decent graphics and music (built from Mega Man V's sound engine), and very few glitches compared to other pirates.
Advertisement:

The plot centers on Ballot, a young child living in a small town with his father; a scientist. One day, Ballot's dad spots a blue moon while observing via telescope, and the following night, meteors come crashing down upon the surface of Earth, transforming animals and certain other objects into powerful beings known as "Beasts", including Ballot's own dog, whom transforms into the mighty and powerful Bladeberus. Afterwards, Ballot meets many other characters he befriends or battles during his journey to locate his father and to put a stop to a greater evil.