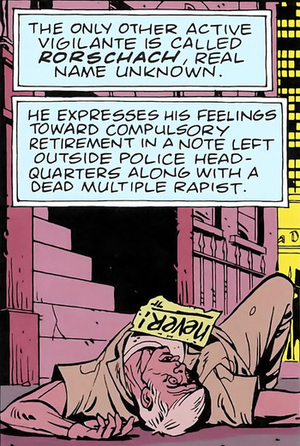 "Maybe no jury would convict you on that, but I would. I'm the jury now, and the judge, and I have a promise to keep. Beautiful as you are; as much as I almost loved you, I sentence you to death."
— Mike Hammer, I, the Jury

Justice doesn't always prevail. Sometimes The Bad Guy Wins, especially in works that closely reflect the real world. And sometimes, just as an evildoer looks like he's going to be a Karma Houdini... BAM! He dies at the hand of a victim, the victim's relative, crazy outsider, or some other interested party.

A Vigilante Execution occurs when someone who has committed (or been accused of committing) a crime, who's gotten off with light or no punishment, is murdered as extrajudicial payback/punishment for that crime.

This can be either the ending to a story or the setup for a second half or prelude to a larger plot.