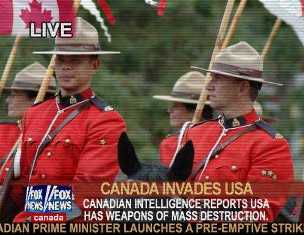 A plot device that depicts the United States as a target of foreign occupation by another (nation-)state or states. The work will usually focus on the heroic efforts of either or both the US Armed Forces and the La Résistance as they try to defend their homeland.

The background of the invasion usually varies on when the work is set. If it is set pre-1990, it is usually a Cold War that got hot or some other form of Alternate History, such as Nazi Germany and/or Imperial Japan carving an isolationist America up once they've finished conquering the rest of the world. 20 Minutes into the Future will sometimes depict a (dystopian) USA that is no longer a Super-Power but merely a Great (e.g. as it was in 1900) or Second-Rate (e.g. as in 1850) or Third-rate (e.g. 1812) Power that would genuinely be threatened by an invasion from a rival power. Next Sunday A.D. settings will usually be very similar to the Twenty Minutes setting, usually featuring a Russian or Chinese invasion. The US's nuclear arsenal almost never gets employed during these stories, despite the fact it'd be a deterrent as per the whole 'MAD' thing, though its non-use is often hand-waved away by the proliferation of some new technology and/or magic — or by the governments simply going "better to try reclaiming what's ours than doom the whole world". Some works give a handwave towards Mexico becoming unfriendly in the years leading up to the war, so that it can be plausibly used as a base for an invasion (the most common example is a Communist Mexico allied with the Soviet Union).

If done right, can make for an interesting plot. However, can also be Anvilicious if it is too blatant a rip-off of any real-life war, especially one in which the US was actually involved. It's also rare for the actual logistics of such an invasion to even be described, because it's hard to do so realistically. The United States' geographical isolation from every other major military power means an invasion would be very difficult, but since the logistics aren't really the point of these stories that usually gets handwaved if not outright ignored.

See also Mexico Called; They Want Texas Back and Russia Called; They Want Alaska Back for more specific examples of this trope. Contrast with War Comes Home, which may be more generic and do not focus on actual real locations. Divided States of America / Second American Civil War sometimes goes hand-in-hand, as other nations come into the country to act as peacekeepers, to secure international interests, or to conquer the splintered US. Goes hand-in-hand with Occupiers Out of Our Country, Fallen States of America and Day of the Jackboot. May or may not involve a Washington D.C. Invasion. If the bad guys have invaded all the rest of world and left America for last, only to be defeated there, then America Saves the Day.

Sub-Trope of Different States of America and Possible War.

On a late summer night in the 1970's, Local 58's sign-off routine is suddenly interrupted by a message from the U.S. Department for the Preservation of American Dignity. In the face of a conventional military invasion which will undoubtedly bring great suffering to America's people, a terrifying conclusion has been come to; civilians must 'ACT' to preserve America's dignity before the invaders can destroy it themselves...

Example of:
Better to Die than Be Killed

On a late summer night in the 1970's, Local 58's sign-off routine is suddenly interrupted by a message from the U.S. Department for the Preservation of American Dignity. In the face of a conventional military invasion which will undoubtedly bring great suffering to America's people, a terrifying conclusion has been come to; civilians must 'ACT' to preserve America's dignity before the invaders can destroy it themselves...