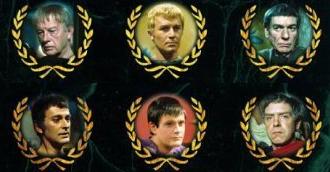 Aired in 1968, Granada Television's take on the early years of The Roman Empire comprised six episodes written by Philip Mackie (who went on to write The Cleopatras for The BBC in 1983) and directed by Derek Bennett, first airing in autumn of 1968. Rather than encompassing the entire Julio-Claudian dynasty, the series focuses primarily on the reigns of Tiberius and Caligula, beginning with the last days of Augustus in 14 AD and concluding with the declaration of Claudius as Emperor in 41 AD.

The six episodes broadly cover three major plot arcs. In "Augustus", the dying Augustus (Roland Culver) ponders the question of whether to name as his heir his exiled, wastrel grandson Agrippa Postumus or Tiberius (André Morell), his wife Livia's son by her first marriage. He settles on Tiberius, who will be succeeded by his nephew Germanicus (Eric Flynn), but in "Germanicus", the armies of the Rhine rise up against intolerable conditions and demand that Germanicus be made Emperor immediately; Tiberius successfully manipulates Germanicus into putting down the mutiny instead of using it to propel himself to the Imperial throne.

The next two episodes detail the Succession Crisis dominating Tiberius' reign and the rise and fall of Sejanus (Barrie Ingham), his right-hand man. In "Tiberius", Germanicus is apparently murdered by the governor of Syria, Piso, allegedly on the Emperor's orders. More prospective heirs are cut down in "Sejanus", including Tiberius' son Drusus and Germanicus' son Nero, as Sejanus tries to manipulate his way into ruling Rome as a regent for Tiberius' young grandson Gemellus (whose mother Livilla is Sejanus' lover); the Emperor eventually catches on and has Sejanus arrested and executed.

The final two episodes cover the brief but chaotic rule of Tiberius' successor. When Tiberius dies in "Caligula", he names Germanicus' surviving son Gaius Caligula (Ralph Bates) as co-heir with his grandson Gemellus. Caligula presents himself as sole ruler and initially rules benevolently, but after recovering from a severe fever, he becomes violently, even homicidally, insane and declares himself a god while massacring anyone he sees as a threat, including Gemellus. His murderous reign continues into "Claudius", but his enemies are finally multiplying faster than he can eliminate them, and he is assassinated by the Praetorian Guard, who declare Germanicus' lame, stammering brother Claudius (Freddie Jones) the new Emperor.

The series has been largely overshadowed by I, Claudius since the latter series aired in 1976, but it was a hit with critics and audiences during its original airing, with Freddie Jones' performance as Claudius being singled out for particular praise and being awarded the Monte Carlo Golden Nymph award in 1969. Among the differences in characterisation are a more sympathetic portrayal of Tiberius, a less sympathetic portrayal of Germanicus, Caligula's descent into madness beginning after his fever rather than at birth, and Claudius preferring that Rome be an empire rather than a republic.