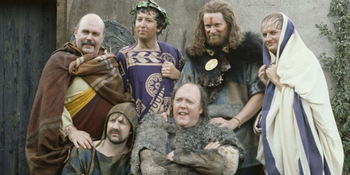 In the year 123 AD throughout the known world the Romans were spreading their own particular brand of civilisation. Some places, Britain for example, were proving especially difficult to Romanise, partly because of the weather and partly because of the Britons and their own particular brand of civilisation. But one place above all became synonymous with all that was turbulent, perilous and barbaric. Its very name struck terror into the hearts of decent men...
Advertisement:

A British situation comedy from the late '80s produced by Channel 4 and written by Jimmy Mulville and Rory McGrath.

In 123 AD the Emperor of Rome (Bill Wallis) appoints Aulus Paulinus (Jimmy Mulville) governor of Britain after Aulus made the mistake of insulting his love, Portia. To add insult to injury the Emperor then appoints Aulus's brother-in-law Grasientus (Philip Pope) as the aide-de-camp.

Upon arrival in Britain Aulus must contend with the British weather and the British people, especially the local tribal leader Badvoc (Rory McGrath) who'll do everything he can to undermine Roman authority and make some money while he's at it.

In 2021, it was announced that the show had been revived for a four-part audio series starring the surviving members of the cast.