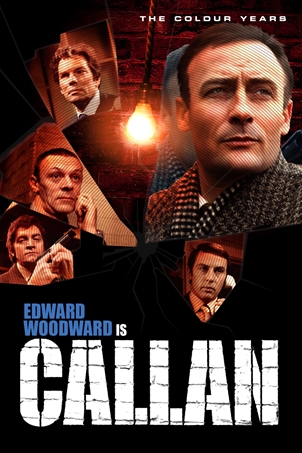 British spy series that ran four series on ITV, from 1967 to 1972. Edward Woodward is the eponymous hero, David Callan, an agent employed by "The Section", a shadowy arm of the British intelligence services during the Cold War. Callan was introduced in a one-off play, "A Magnum for Schneider", which became in effect a pilot for the series; there was also a movie based on the pilot (or the novelisation of it) and a reunion episode, "Wet Job", in 1981.

The Section specializes in disposing of enemies of the state by dubious methods like blackmail, extortion and murder, and Callan is its most highly regarded operative. He is helped and hindered in his work by his boss, code-named Hunter except for a brief period during season 4 when Callan is Hunter, fellow agents such as the sadistic Toby Meres and the cocky James Cross, and a malodorous little small-time crook named Lonely.

The creator (and primary writer of the series) James Mitchell also wrote several Tie In Novels about Callan which were, if anything, Darker and Edgier than the series itself. In 2017 Big Finish, best known for Big Finish Doctor Who, announced they were reviving the series, with adaptations of James Mitchell's son Peter's short Callan stories for the Sunday Express.

The Hunters are played by: