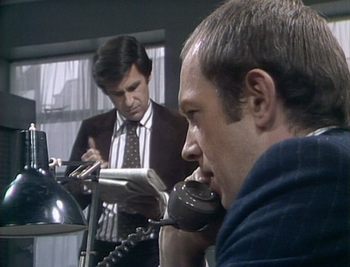 Willie Caine and Neil Burnside, doing some real spy work.
Special Operations doesn't mean going in with all guns blazing. It means special planning, special care, fully briefed agents in possession of all possible alternatives. If you want James Bond, go to your library. But if you want a successful operation, sit at your desk and think, and then think again. Our battles aren't fought at the end of a parachute. They're won and lost in drab, dreary corridors in Westminster, and hopefully in Oslo.
— Neil Burnside, nominally to his Norwegian counterpart but actually to the audience
Advertisement:

British spy series that ran three series on ITV, from 1978 to 1980, written by creator Ian Mackintosh. Neil Burnside is the Director of the Operations division of the Secret Intelligence Service (aka MI6) during the Cold War. Under his supervision is the Special Section, three agents nicknamed "Sandbaggers", led by Willie Caine.

Once described as "men in cheap suits dying badly in Prague," it clearly falls on the cynical side of the Sliding Scale of Idealism Versus Cynicism, and is about as far from James Bond as you can get (which the characters themselves are apt to point out.) Most of the plots revolve around Burnside wrestling with bureaucracy within and without, whether it's his superiors at SIS, his domestic counterparts at MI-5, or the British government.

See also Greg Rucka's spy series Queen and Country, which was so heavily inspired by this series it could have been called The Sandbaggers: The Next Generation.