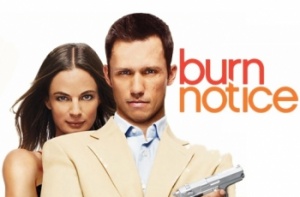 I'll need a few cell phones, some C4 and my sunglasses.
"My name is Michael Westen. I used to be a spy. Until...
(voice on phone: "We've got a burn notice on you. You're blacklisted.")
When you're burned, you've got nothing: no cash, no credit, no job history. You're stuck in whatever city they decide to dump you in. You do whatever work comes your way. You rely on anyone who's still talking to you: a trigger happy ex-girlfriend; an old friend who used to inform on you to the FBI; family, too — if you're desperate. And a down-and-out spy you met along the way. Bottom line: As long as you're burned, you're not going anywhere."
— Opening Narration
Advertisement:

Burn Notice is a USA Network original series that ran from 2007 to 2013. The show follows the adventures of Michael Westennote no, not that one

, although he did guest star on the show, an American spy who is blacklisted by the government—the titular "burn notice

"—during a covert operation. Michael escapes the operation with his life, passes out on a plane, and eventually wakes up in his native Miami. He soon reconnects with family, friends, and an old girlfriend who happens to be in the neighborhood.

Michael is locked out of his bank accounts, and he can't exactly get a job recommendation from his former employers. To make ends meet, he (reluctantly) accepts clients from around the Miami area and helps them solve their problems under the table. These problems usually involve saving said clients from various life-threatening situations, mostly of the "good guy gets deep in debt to bad guys" variety. While these tasks take up the majority of most episodes, the show also spends time on Michael's various attempts to figure out who in the government burned him (and why), his ongoing quest to clear his burn notice, and his interpersonal relationships with his friends and family. The overarching Myth Arc of the burn notice, and the fallout from it, forms the B-plot for most of the first few seasons, before shifting to the primary focus in the latter half of the series.

Michael might not always like the work he does, but at least he knows better than to work alone. Fiona Glenanne, his ex-girlfriend (and a former IRA operative), and Sam Axe, a retired spy/former Navy SEAL who Michael worked with in the past, watch Michael's back as he takes on con artists, mobsters, gang leaders, and various other underworld riff-raff. From Season Four onwards, the team gains an extra member in Jesse Porter, a counterintelligence agent who Michael accidentally burned as a side-effect of his quest to undo the burn notice. Even Michael's mother, Madeline, often helps by referring new clients to Michael (and sometimes playing a role in Michael's operations).

This ragtag team has plenty of skill when it comes to crafting primitive explosive devices and homemade spy gear out of household items. Unconventional warfare serves as one of the show's major themes; at one point, Michael says, "Guns make you stupid. It's better to fight your wars with duct tape. Duct tape makes you smart." Another theme comes in the form of crafting identities out of nothing: when dealing with the bad guys, Michael and company will often play the role of criminals (either rivals or friends of their target) or even innocent civilians, but they never show their true colors unless someone or something forces their hand.

Michael is played by Jeffrey Donovan, a previously under-the-radar actor; prior to Burn Notice, he had guest-starring roles on Law & Order and Homicide: Life on the Street, and he showed up in the best-forgotten Book of Shadows: Blair Witch 2. Fiona is played by Gabrielle Anwar, most famous for her brief role as Al Pacino's dancing partner in Scent of a Woman. Sam is played by famous chin Bruce Campbell. Sharon Gless of Cagney & Lacey fame plays Madeline. Jesse is played by Coby Bell, previously known for his work on Third Watch and The Game (2006).

Michael pulls double-duty as the show's narrator: in voice-overs, he explains to viewers why he chooses a particular course of action. Instead of doing a real-time Inner Monologue, Michael narrates as if giving a lecture to a class of students. Viewers can think of Michael the Narrator as a slightly different character from Michael Westen. Through this method, the show addresses a large number of tropes (most of them spy-related) and plays with them in a variety of ways. Typical action movie clichés also get averted: a car won't explode unless someone's planted a bomb on it, characters will spend several episodes limping around if they get hurt, and escapes involve either dangerous stunts or being small enough to squeeze through an air vent.

The show branches away from A-Team-style clients-of-the-week in Season Five to focus on Michael's quest to clear his burn notice. It explores, expands upon, and develops the drama behind Michael's personal mission and how it affects his life. (A number of other shows on the USA Network began to copy this approach in the hopes of reaching this show's level of success.) By the middle of Season Six, the show wraps up Michael's original mission and introduces new plot points to carry the story through a seventh and final season.

USA also made a prequel movie to the series: Burn Notice: The Fall of Sam Axe, which premiered in 2011. The film, which was directed by Jeffrey Donovan, stars Bruce Campbell (obviously) in a look at the events that landed Sam in Miami.

We're TV Tropes, and we used to list all the Burn Notice tropes on this page. But when a page gets too big, we have to break it into subpages. This doesn't involve duct tape—but it should.