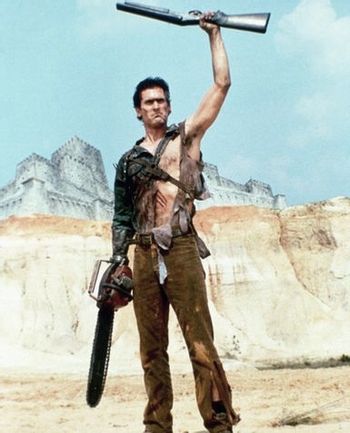 Pictured: Awesome.
"...is so cool that every time someone mentions his name, a man gets cured of impotence."
— The Nostalgia Critic
Advertisement:

First of all, it's Bruce freaking Campbell (not a Hugo).

Shooting to popculture infamy with his role as the chainsaw-handed, shotgun-wielding Ash Williams in the Sam Raimi-directed Evil Dead film series, Bruce Lorne Campbell (born June 22, 1958) is one of the most sought-after B-movie/character actors in Hollywood. His roles tend to aim towards the comedically awesome badass, and his very manly chin only makes him more famous.

Campbell's other roles were often found in television work, where he held the lead role in the steampunk-inspired action-comedies The Adventures of Brisco County, Jr. and Jack-of-All-Trades, and a many-times recurring role as Autolycus, the King of Thieves in Raimi's Xena: Warrior Princess and Hercules television series. In fact, his most high-profile work usually comes from bit parts in Raimi's various productions, but even outside of that Production Posse he is almost constantly involved with one project or another. One exception was his long-running role in Burn Notice as an over-the-hill (but still wily) Navy SEAL named Sam Axe.

He is Spider-Man's most powerful, implacable foe. His cameos in Sam Raimi's film trilogy are considered some of the funniest moments of those films: the wrestling ring announcer (and bestower of Spidey's official name) in the first film, the obnoxious usher who stops Peter from attending Mary Jane's play in the second (thereby making him the first character to defeat Spider-Man), and as the French maitre d' who helps Peter propose in the third. Campbell also does voice work for that franchise, providing the voice of the Narrator in all three Spider-Man video games; his role in those games appears to be only partly scripted, as Campbell shows his trademark dry delivery and a distinct flair for ad-libbed and off-the-cuff humor. Regardless of the franchise's 2012 reboot, Campbell's voice returns in the The Amazing Spider-Man licensed game, this time as a full-fledged villain.

His autobiography, If Chins Could Kill: Confessions of a B-Movie Actor, was published in 2002 and despite the name, it is actually a memoir that mostly deals with his early life, the Evil Dead series, and his observations about the unrecognized rank-and-file people who make Hollywood work. Part two of his autobiography, Hail to the Chin: Further Confessions of a B-Movie Actor, was published in 2017 and details his personal life post 2002, and his work on Burn Notice, Bubba Ho-Tep, My Name is Bruce, and other projects, including the first season of Ash vs Evil Dead. Another book, Make Love!: The Bruce Campbell Way is currently in hardcover and paperback. It is a fictional account of how he nearly became an A-list actor, as well as his ruminations on the concept of romantic love.

Not to be confused with the composer of the same name

References in other works