Enmity with an Object 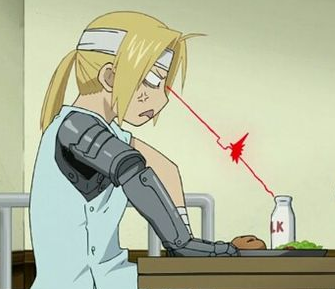 Edward Elric: Picking fights with milk since 2001.
"This wallpaper and I are fighting a duel to the death. Either it goes or I do."
— Oscar Wildenote  He lost.
Advertisement:

If Companion Cube is the love someone will have for an inanimate object, this is the other side of that coin — a deep-seated, irrational hatred a person has for an object.

The person will usually treat the object as a hated enemy or rival in spite of the fact that the object has no will of its own and cannot in any way return the person's antipathy. If the quarrel is physical in nature, whatever damage the object delivers onto the person may seem to be driven by malicious intent, but it's just simple mechanics and bad luck.

May be justified with a Job-Stealing Robot (as long as the robot is just a mindless tool) or Vengeful Vending Machine. It's also very common when the person has The Alleged Car, because if your car hates you, you're going to hate it back.

This is a sister trope of Cargo Envy, where a person is envious of something that an attractive person is showing affection to, which may or may not lead to a rivalry with the object.

Compare Does Not Like Spam. Compare also Animal Nemesis, where the foe is at least alive, if not capable of reason.

Careful when your object is/turns out to be an Animate Inanimate Object - the object must not be sentient/sapient, or at least the person with the enmity must not know about it. Otherwise it doesn't fall here.