Western Animation / Bartholomew Versus the Wheel 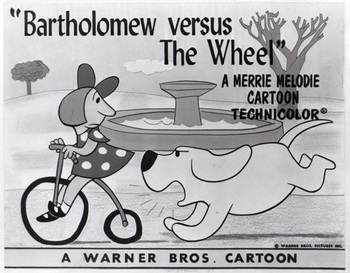 "Bartholomew Versus the Wheel" is a 1964 Merrie Melodies short directed by Robert McKimson.

A young boy (voiced by Leslie Barringer) tells the story of how his dog Bartholomew developed a seething hatred towards wheels after his tail gets run over by a scooter. As he grew bigger and bigger, he took the wheels off of more and more vehicles.

When Bartholomew tries to take an airplane wheel, however, he gets sent to a desert country where there are no wheels to chase due to everyone riding on animals. Back in America, the owner and the entire town try to look for the dog, who hitches another airplane ride the same way he came to the desert country. The town celebrates his return, and Bartholomew had grown to like wheels, and begins to hate what dogs are supposed to hate - cats.

It is the second short to use the abstract WB intro and outro from Chuck Jones' "Now Hear This".

"Bartholomew Versus the Wheel" provides examples of: